Any type of exercise is good for your health. But in a recent study, researchers found that a specific type called high-intensity interval training (HIIT) may improve age-related changes in a person's cells.

In the study, published in the journal Cell Metabolism, researchers measured the body mass index and insulin sensitivity of two groups of older and younger people (between ages 18 to 30, and those from 65 to 80). The people were then split into three groups to try different types of exercise.

At the end of the study, the researchers took measurements again and found that all types of exercise improved people's levels of fitness and increased their insulin sensitivity. Strength training, not surprisingly, was the best type of exercise for increasing muscle mass. HIIT and combined training improved aerobic capacity among the men and women. MORE: Scientists Explain Why Interval Training Works But HIIT benefited people's cells the most. Researchers found that it improved age-related decline in muscle mitochondria, cellular powerhouses that create energy molecules for cells. HIIT also appeared to increase the production of proteins in cells that are important for normal body function—a process that normally declines during aging. Yet researchers found improvements in people of both age groups.

Though the study's findings are early, the results provide insight into how exercise can improve a person's health, even among older adults. (Alexandra Sifferlin Apr 21, 2017 TIME Health For more, visit TIME Health.) 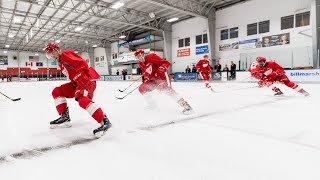